Posted on December 29, 2015 by robynsewsthisandthat

I had promised a post about the t-shirt quilt that my sister-in-law asked me to make for my nephew for Christmas. Her request for the quilt was that it fit on his double bed at college and that it be warm and soft. She brought me 25 t-shirts from a collection that she has kept since he was in elementary school. Even earlier than that as there was also a sweat shirt that I made him when he was 2.

The shirts are really fun. Most are special ones that she had saved and most were in really good shape. I had visions of getting really creative with these shirts and producing a master piece worthy of displaying on a wall. Ha!!!

After measuring every logo on every shirt front or back and carefully recording the sizes I cut out grid paper to each size. Then I laid them all out on another sheet of grid paper in a configuration that appealed to me. Somewhat balanced. Then I stood back and took a long hard look at it. 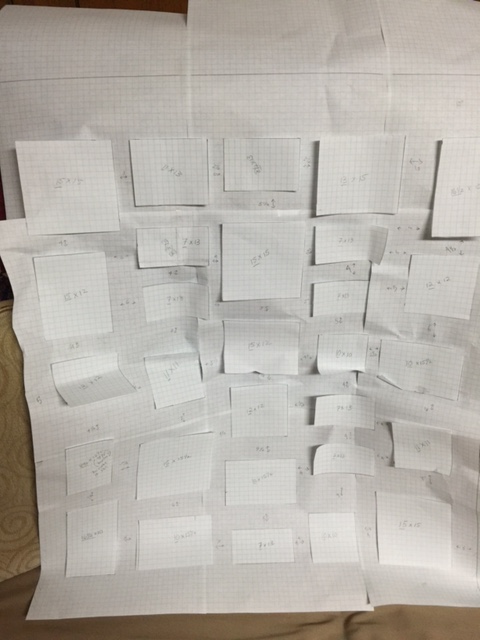 There was no easy way for me to transfer my idea to a quilt. Especially since I had just over a week to finish this project!! I washed all the shirts to remove my markings and after a sleepless night decided that I would just cut the shirts into blocks, each the same size determined by the largest length and the widest width of the graphics. That ended up being 18 inches by 19 inches. 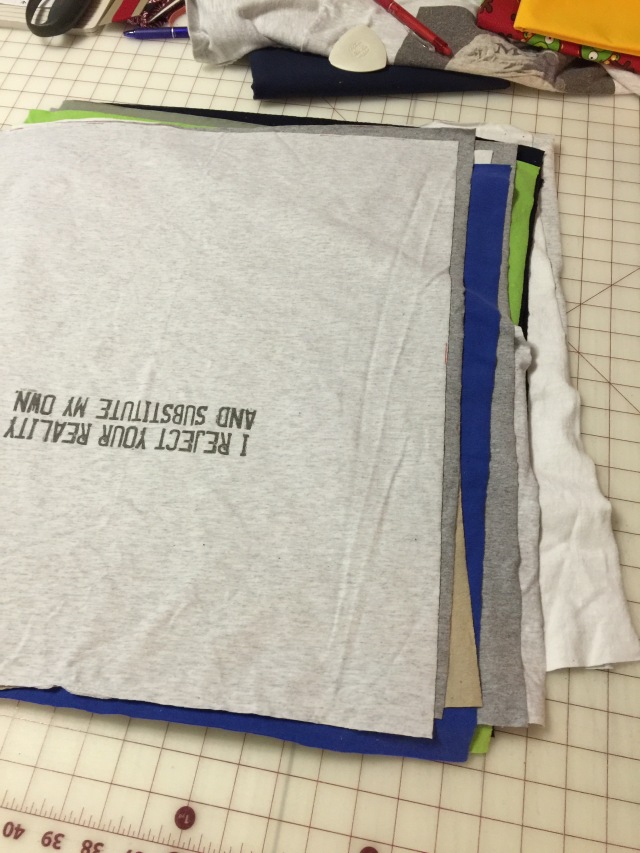 After all the shirts were cut, it was time to stabilize the shirts. I didn’t have any fusible tricot but, I had a couple of bolts of ultra-lightweight fusible interfacing. 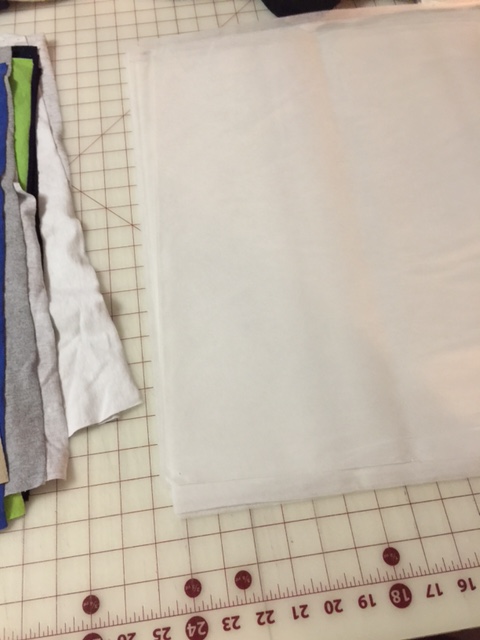 It was a long, slow process fusing all the backs of the shirts but, it really makes the rest of the piecing easier. I used a pressing cloth that I spritzed with water and then pressed the fusible to the wrong side of the shirt block. 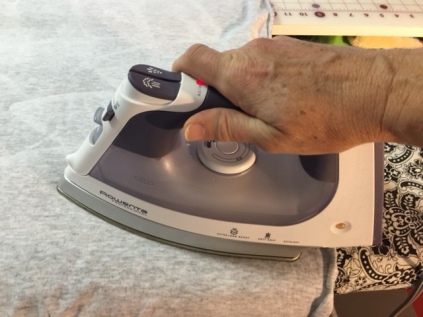 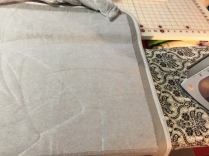 make sure the fusible is attached 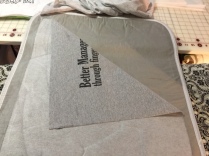 Then I laid out the blocks on my daughter’s queen size bed in an order where I could see how the blocks would look together and to see how big the quilt would be. I took a picture of it so I could use it as a guide when I sat down at my sewing machine to begin piecing the rows. 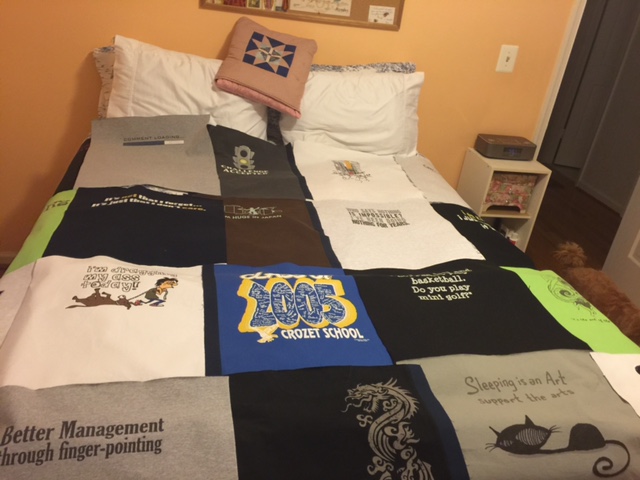 There were some smaller shirts that I had to add strips of quilting cotton to in order to make them the same size as the rest of the blocks. Luckily there were 5 blocks of those and I placed those down the center of the quilt top.

Now, if I had only looked at the photo more closely when I was piecing the rows. I ended up mixing the placement of the first two blocks of the second row which left 2 black blocks next to each other. Oh well. I really wasn’t too worried about it as the clock was ticking faster and faster. 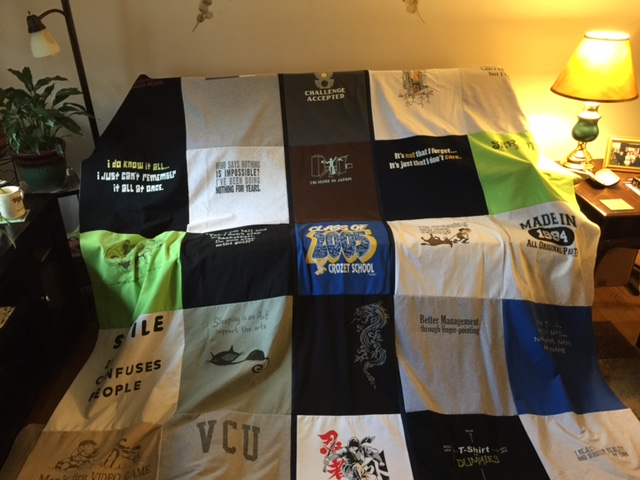 I was so happy that the quilt top was as large as it was. My nephew is a tall boy and I knew he would want something that easily covered all of him. I had purchased a black flannel to use for the back of the quilt and a low loft poly-fill to use for the batting. I also had a special t-shirt and the sweat shirt pieces that I wanted to add to the back. The special shirt was one that I had saved from the Monticello Brewing Co. which was a “you-brew” pub that my brother and dad had 19 years ago when my nephew was just a toddler. There are not many of these shirts around any more. The graphic is of Thomas Jefferson wearing a logo hat from the brewery. I thought that it should spend the rest of it’s life in my nephew’s quilt. 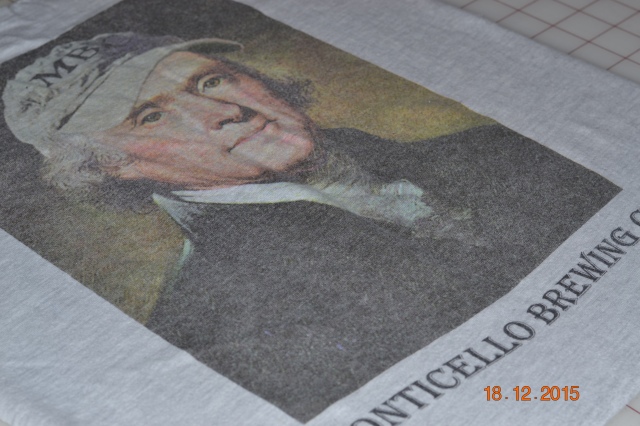 I didn’t get any pictures of the way that I finished the quilt other than I tied the quilt using embroidery floss. I also cut the backing 2 1/2 inches wider than the quilt front and turned under a wide hem to create the binding. I hand stitched the binding to the front. And the clock kept ticking… 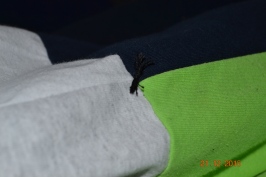 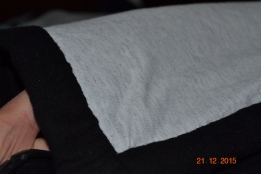 I am really pleased with the way it turned out. 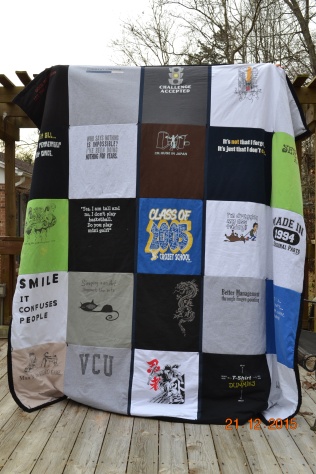 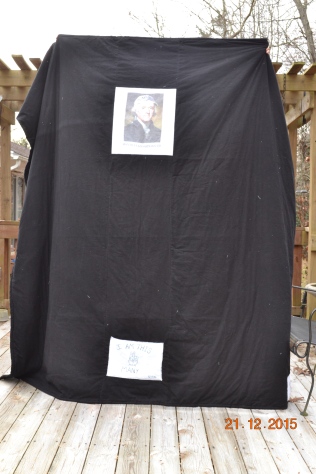 My sister-in-law presented the gift on Christmas Eve so we all could see my nephew open it. I think that he liked it too. My mom said that she had never seen him smile so much. 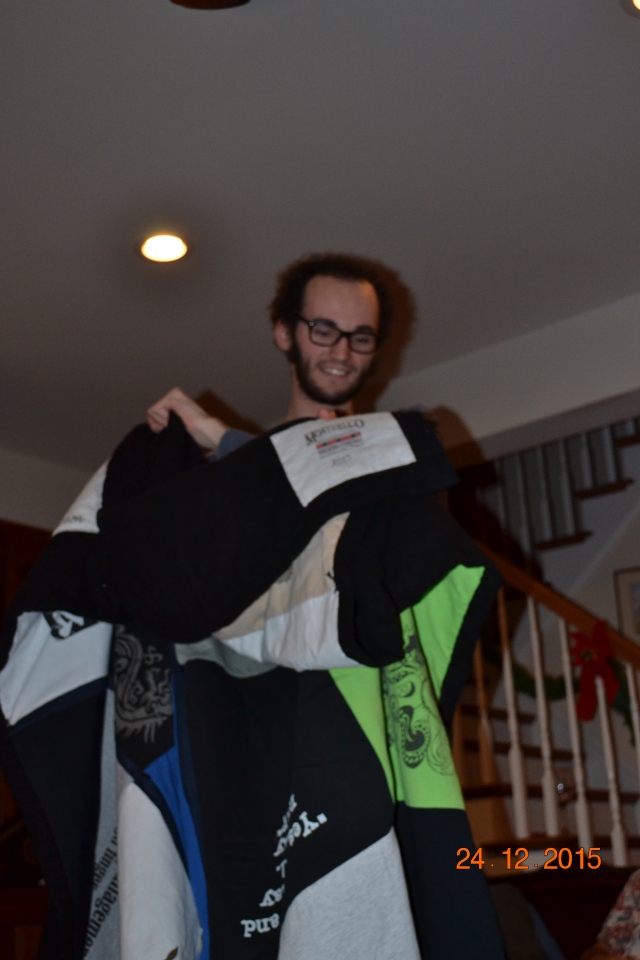 It was really fun to make and I know that my brother, sister-in-law and nephew are all pleased with it. I would have really liked to make a more creative layout of this quilt. I do have 2 boxes of my son’s graphic t-shirts that he sent to me 3 (or more) years ago that I have always had the intention of making a quilt for him. He has been living in more tropical climates so I haven’t been really pushed to start making one. Now I guess I can use his as an excuse to “up” my game and get creative.

I apologize for such a long post. I am really excited about the final results of this project. Have you ever made a t-shirt quilt or one from old fabrics that have a sentimental meaning to you? Please share. I would love to see what you have done. It may inspire me.

I sew. I knit. I craft. I have too many desired projects and not enough time to create. I am mom to 8 and grandma to 7 wonderful gifts. I am married to my best friend. I created this blog to track my projects and to inspire others. We all learn by sharing knowledge.
View all posts by robynsewsthisandthat →
This entry was posted in Sewing, Uncategorized and tagged gift giving, sewing, t-shirt quilt. Bookmark the permalink.